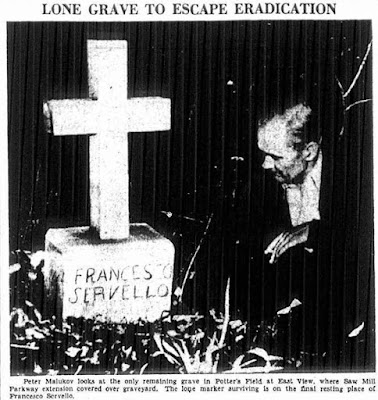 [An undated newspaper clipping forwarded to me by Philip Hayes, a very knowledgeable follower of our historical society's Facebook page]

Only one headstone remains standing at County's Old Burial Ground at East View, ploughed under for highway improvement.

EAST VIEW, Nov. 14. The purring wheels of modern automobiles traveling the Saw Mill River Parkway here pass over the graves of dozens of paupers. One headstone remains standing, ghost-white against the brown hillside, a silent marker of a Westchester Potter's Field which made way for the needs of the day.

The small cemetery was the burial place for inmates of the County Home who were without family or had no other place in which to be interred. It was a small plot of land at the East View Station. The potter's Field was in use for over 100 years, but was not used after the county acquired a new cemetery near Grasslands Hospital. The last burial was made there around 1920.

The burial ground was flat, so when the land was taken to build the parkway, the graves were covered with about 20 feet of dirt, and the Saw Mill River Parkway runs along on a ridge high above the graves. None of the graves were disturbed in the construction last year.

Francesco Servello, a one-time inmate of the County Home, was one of many buried there. His is the only grave which was not disturbed, and, with its simple fieldstone cross, stands like a neglected sentinel beside the parkway.

But Francesco Servello has not been forgotten, for once a year someone -- no one at the County Home knows who it is -- comes to the grave and puts flowers on it. Now, the spot is bleak and uncared for, with dead palm branches lying across it, and a stick from which once floated a small flag.

To get to the grave, one must either climb the wooden rail along the Parkway, or climb a barbed wire fence by the railroad tracks, and walk along the sharp brambles to the lonely marker.

According to Peter Makulov, an employee of the County home since 1915, the graves were all marked with either fieldstone or wooden crosses.
Posted by Madeline at 10:21 AM No comments:

For those of you who have been following the long saga that is my journey to the PhD, you might be interested to know that I submitted my Master's thesis on Tuesday. The title is "'A Corpse instead of a Pauper': Graveyards as Sites of Ideological Production in 19th-Century Westchester County, New York." This is the newspaper article from which that title was taken, published in The Mount Kisco Recorder in 1886:

A CORPSE INSTEAD OF A PAUPER
Mrs. Ann Eliza Young, an aged widow, once quite well to do, and residing all her life at Tuckahoe, was taken to the County Almshouse, last Thursday morning, and died of fright and a broken heart in the carriage which landed her at the door. The old lady wept all the way to the almshouse, and prayed that death might overtake her before she became a pauper. When the carriage stopped at the door she looked out of her carriage window, gave a shriek, threw up her hands and fell dead. Mrs. Young’s husband was once a prosperous stonecutter, and they lived in comfort, but about 20 years ago he was drowned, and since that time the widow has maintained herself on what remained of his property. This being all gone and she being childless, she became a county charge. She was buried at the almshouse.

And here is some of what I wrote about it:

While the story of Ann Eliza Young featured in the Recorder in 1886 may have been colored by some degree of journalistic flourish, the almshouse records attest to its essential truth: that a woman who had "lived in comfort" could easily fall into a state of destitution in her old age ...

Ezra Yerks, a 69-year-old shoemaker and resident of Mount Pleasant, expressed a sentiment similar to that of Ann Eliza Young when he was admitted to the almshouse in 1867, suffering from paralysis: according to his admission record, "[h]e asserted on his arrival here that he would rather die than be obliged to become an inmate of a Poorhouse" (Record No. 159) ...

Despite what the title of the article implied, death had not spared Young the fate she had feared: she was, in death, treated as a pauper. A burial at the almshouse spoke to the same anxieties that surrounded the confinement of a living person: those of anonymity, disgrace, and exclusion from society. Buried in a sterile institutional setting, among strangers, in a grave that, if marked, was given only a minimal slab with a number, the pauper dead were denied the normative 19th-century program of rituals and trappings that served to beautify death and dignify the deceased. The starkness of the paupers’ graves, without an epitaph or icon to mitigate the terror of mortality, recalled the grim Calvinist attitudes of the early colonial era which had long since given way to romanticism.

Furthermore, paupers were not even guaranteed what had come to be considered every person’s fundamental right: that of an eternal resting place. In the 1920s, the Westchester County Almshouse graveyard was destroyed to build the Saw Mill River Parkway. A similar fate befell many other institutional burying grounds in the 20th century.
Posted by Madeline at 10:11 AM 3 comments:

After reading this story from 1892, I couldn't help but investigate:

Visitors to the Westchester County Almshouse have probably had pointed out to them an Italian named Nichol Lapano [sic], who is eyeless and armless. While employed by the Mount Vernon Water Company, several years ago, in Yonkers, nitro-glycerine exploded, maiming the unfortunate man for life. His life was despaired of for several months, but his great vitality brought him through. He was subsequently sent to the County Almshouse at East View. His counsel sued the company for damages, and obtained a judgment of $7500 in the courts. An appeal was taken to the Court of Appeals, and last week that body affirmed the judgment. Westchester News 25 December 1891

Nicholas Lapano, an Italian, while in the employ of the Mount Vernon Water Company attempted to thaw out some dynamite cartridges, when they exploded and he lost both eyes and both hands. He sued the company in the circuit court and got a verdict for $7,500. The company took the case to the court of appeals, which has just affirmed the decision of the court below. Lapano is now an inmate of the Westchester County Almshouse. The Eastern State Journal 26 December 1891


The complaint alleged that the plaintiff was employed by the defendant as a day laborer to dig out a reservoir, and aid in the construction of a dam at or near Pelhamville, in the county of Westchester; that the defendant negligently provided and used frozen dynamite cartridges and unsafe and improper means for softening the same; that the plaintiff was ordered and directed by the defendant to place said frozen dynamite cartridges before the fire in the open air, and warm one side first and then to turn them around and warm the other side, and that in doing so without any negligence or carelessness on his part, the cartridges exploded, to the serious injury of the plaintiff.

Unfortunately, that's all I've been able to find on him via the internet.
Posted by Madeline at 2:30 PM 12 comments:

While perusing some old photographs at a used books store in Providence, I came across four portraits belonging to the same family. Since they were all being sold separately, I thought I should buy them in order to ensure they would stay together (perhaps that was the seller's intent all along). I have always loved perusing stores for old photographs but it frustrates me immensely when they aren't labeled with the subjects' names. Equally frustrating is when they're labeled "my mother" or "cousin Jane." Thanks, 19th-century people, that really helps.

Of the four photographs that I bought, three seem to be of the same person, Frederick Almy DeVoll. The other was his wife, Mary Jane Usher DeVoll. While researching them, I was able to uncover many interesting details about their lives, and in particular about their children. Frederick was born about 1845 in Massachusetts and Mary was born about 1844 in Rhode Island.

Frederick first appears in the 1850 census in Westport, Massachusetts. Since this census doesn't list relationships between members of a household, I had to rely on other evidence to confirm my speculations. Barney Wing, a 61-year-old sailor, was married to Abby Wing, age 48. Mary A. DeVoll was their daughter, age 24. Susan, Benjamin, and Frederick were Mary's children. But who was the children's father? The family obelisk in the Westport Point Cemetery (shown below) reveals that it was Benjamin DeVoll, who died in 1848, leaving his then 22-year-old wife with three children under the age of six.