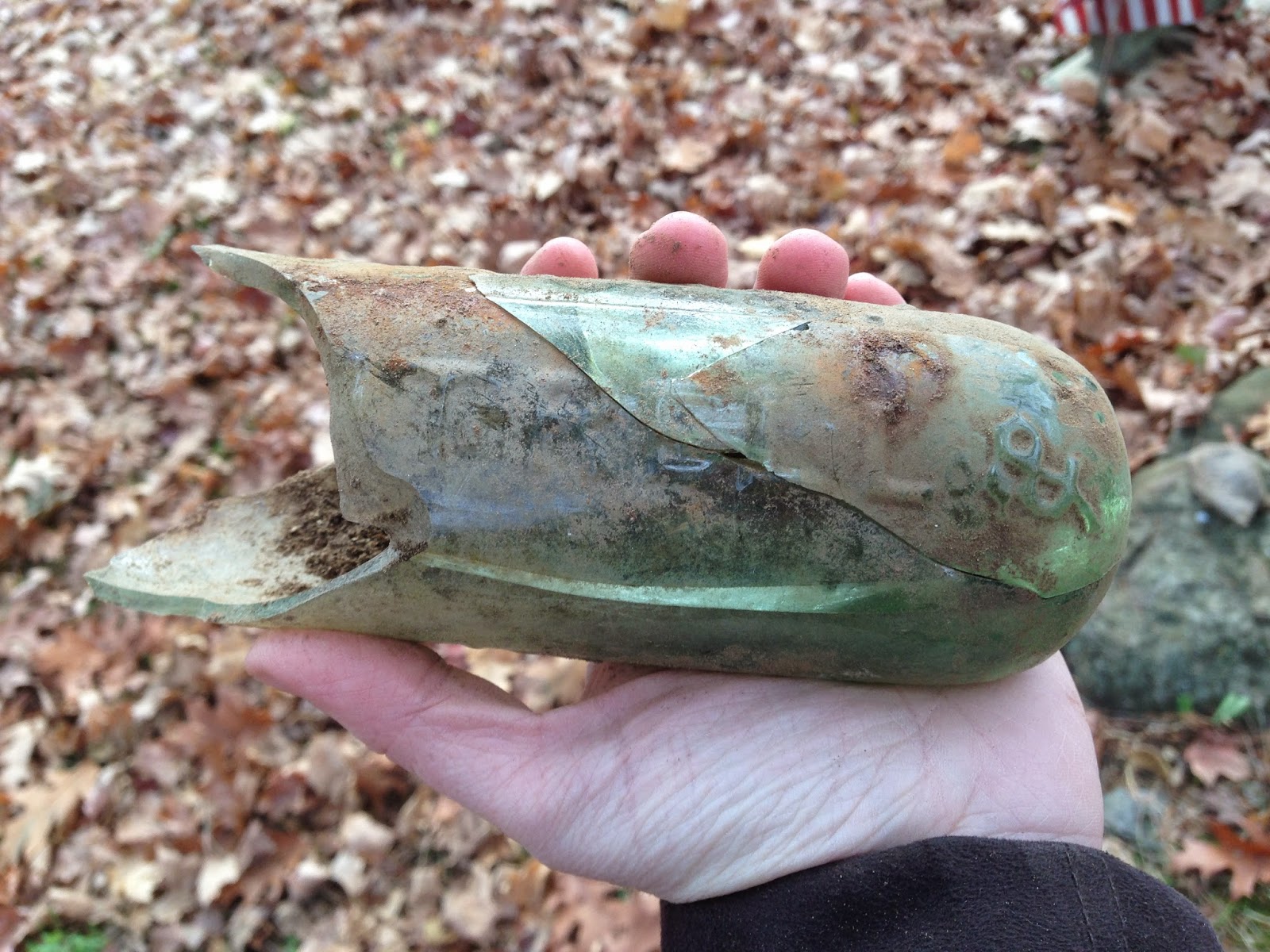 Due to several factors - including the rapidly dropping temperatures and Laurie's and my busy schedules -yesterday was our last dig day for this season. Of course, this in no way marks the end of our work on the site, as the end of fieldwork just means that processing and analysis are yet to begin. For every day spent in the field, you can expect to have at least three days of processing and analysis, and the ultimate working of the material into a finished product (i.e., an article or thesis) can take even longer than that.

Our last day in the field did not disappoint. We have been finding pieces of this transfer-printed teacup (or perhaps multiple teacups with the same pattern) for over a year now. This is by far the biggest piece we have found, and wouldn't you know, it has a registration mark! 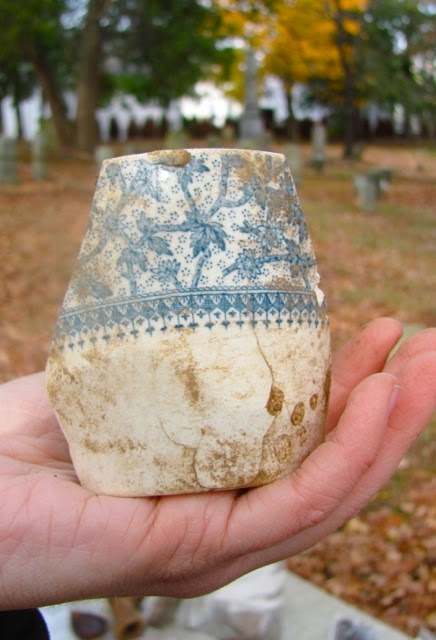 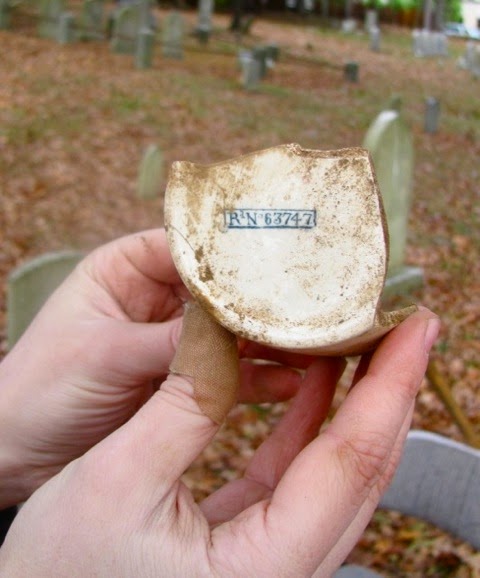 This mark allows us to date the design securely to the year 1886. However, the actual teacup could have been made later than that - thus, the mark provides us with a terminus post quem. This website is a great resource for identifying registration marks. The system was implemented by the British Patent Office, which means that this teacup was made in Britain. We also found the handle of the teacup and a number of other pieces. I think it's a good candidate for reconstruction.

Other exciting finds included this bottle marked "Hygienic Laboratory" (which, according to the internet, was the first incarnation of the National Institutes of Health, from 1891-1930): 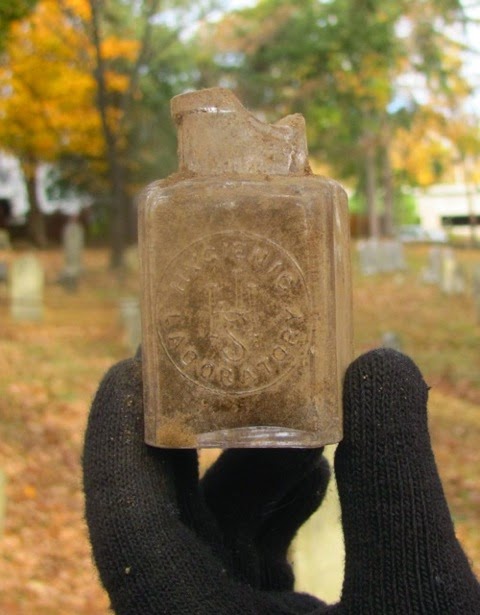 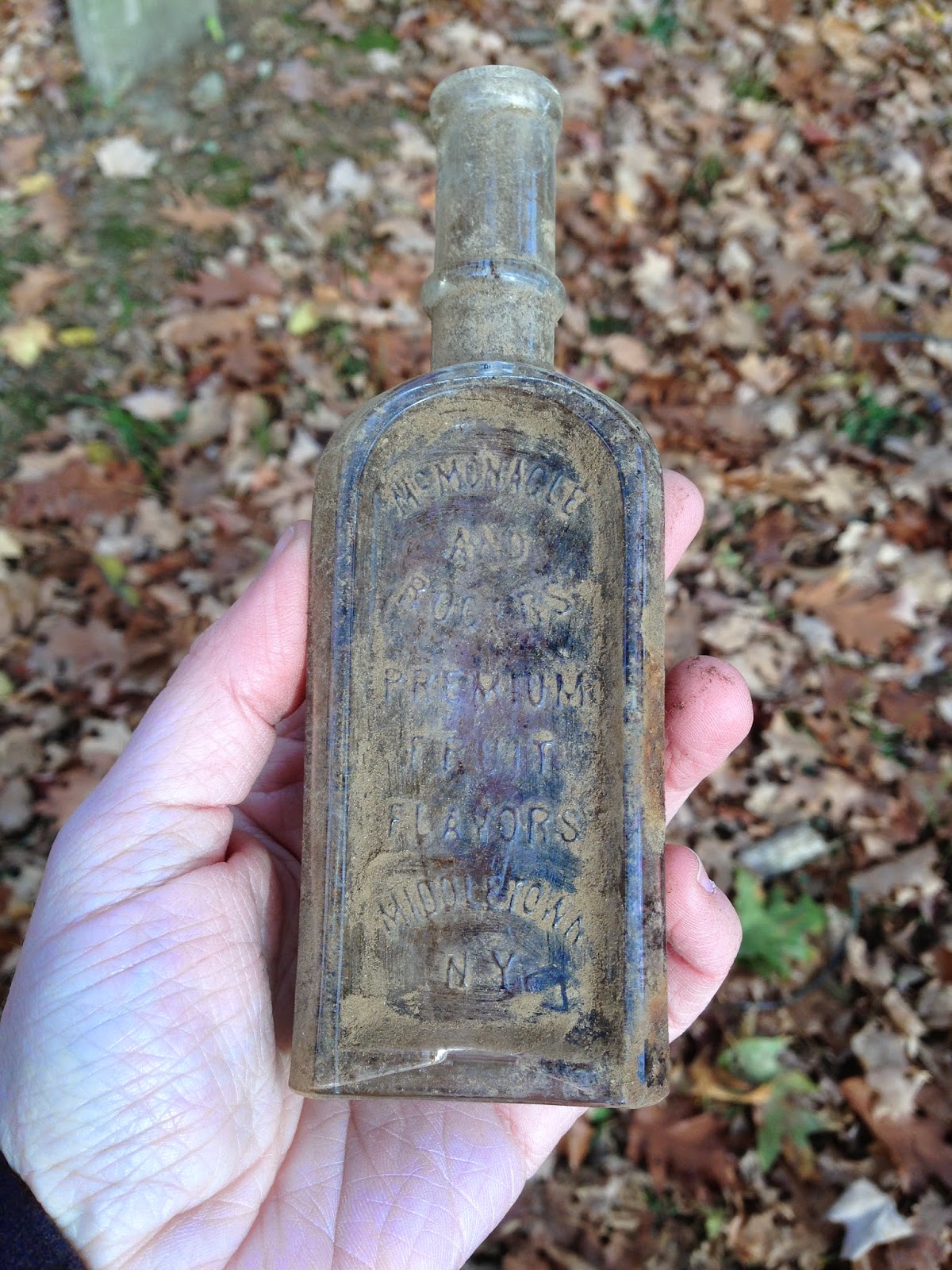 These pieces of feather-edged or shell-edged ware. I think it may be pearlware but I'm not positive. It may date from the late 18th to the early 19th century and would have been made in England. 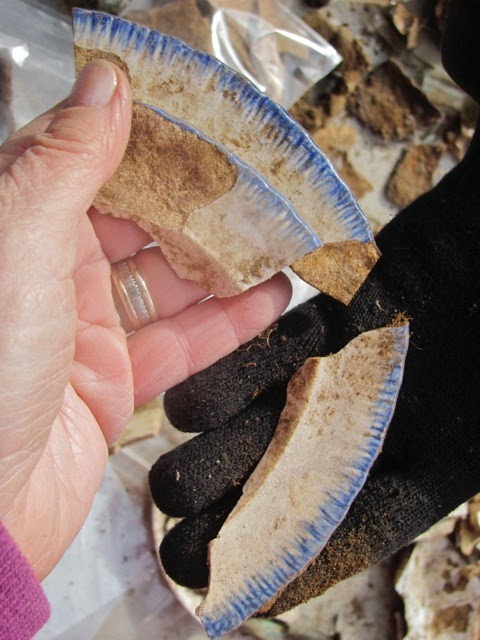 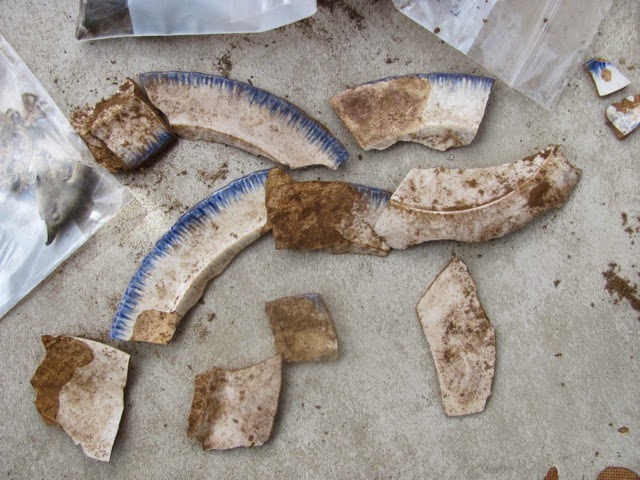 And ... these things (below). The top one seems to be some sort of charm. The bottom one - well, we debated whether it was a bird's head or a bell (or both?). It seems to have been squished a bit, and there's a clapper inside. Is it just a coincidence that it looks like a bird? 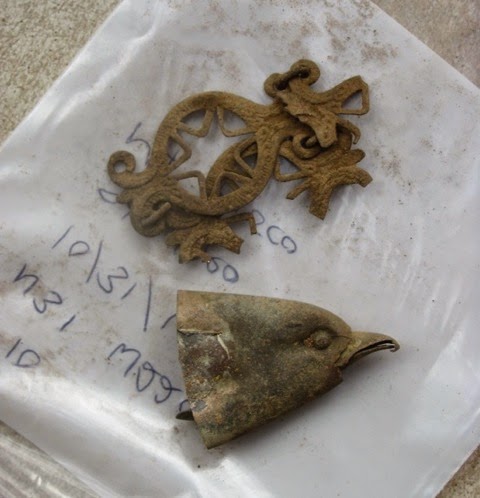 During our work on the dump, Harry and Bruce managed to excavate the gravestone that the team located on Monday. It's definitely a footstone, marked with the initials R. S. But who was R. S.? We still don't know. Sands, Sarles, Seaman, See, Sherwood, Slagle, Smith, Stanton, Stokem, and Swain are all the S surnames in the cemetery (that we know of). One thing we do know is that this was not the original location of the footstone. It's been broken at the base, and the rest of it is nowhere to be found. 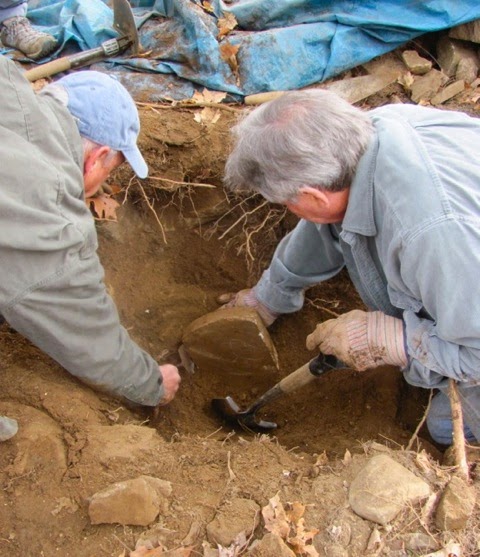 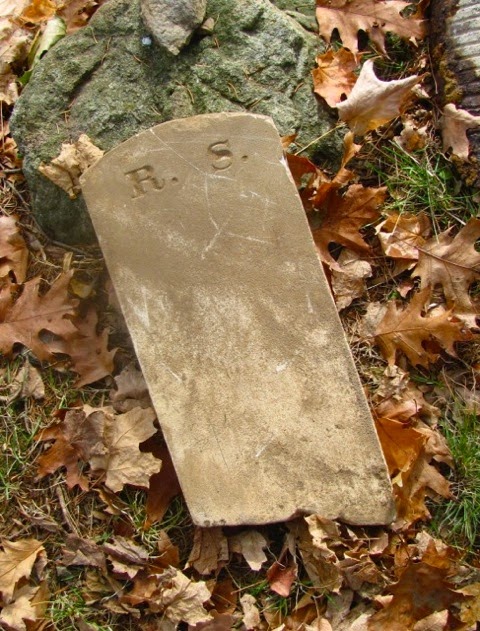 Other than the footstone, the finds we made in the dump yesterday were pretty typical of what we've found here over the past year: ceramics of all kinds, glass, metal, shoe leather (along with some very corroded buckles), shells, a piece of molded cement, a few nails, a single glass button, animal bones, some additional pieces of teapot, and some steel wool. We didn't find any more pipe bowls or stems. But we did find two ice skates. 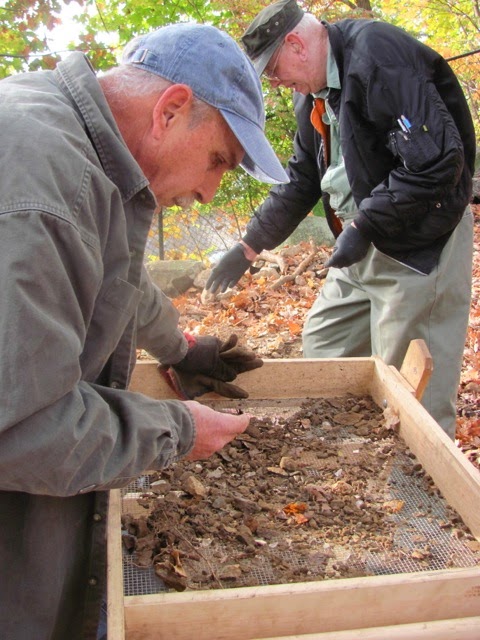 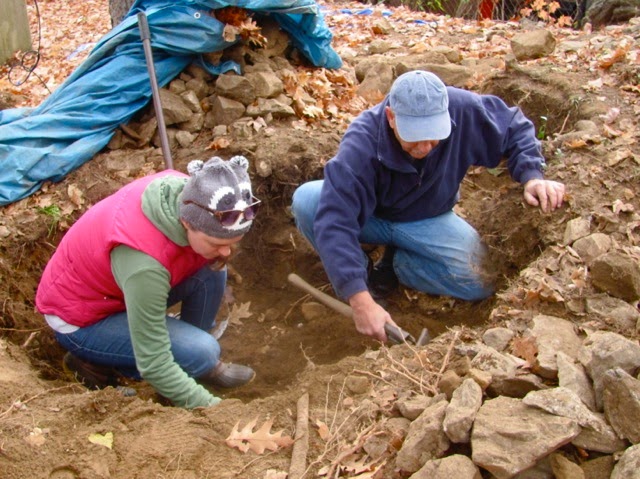 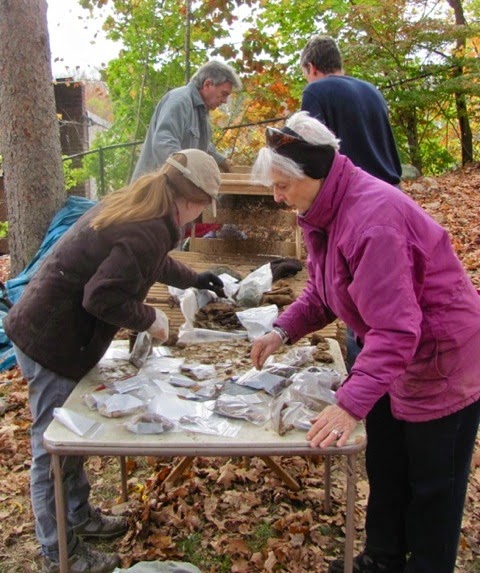 As always, those of us who were sorting and bagging the finds struggled to keep up with those who were digging and screening for them. You can see in the photo above how our process works - it's somewhat like a conveyor belt, with bucketfuls of dirt being dumped into the screen at the far end and working their way down the tables to be bagged. At the end of the day, the bags are placed in a milk crate to be temporarily stored in my garage until they can be transferred to the Nature Center for processing (planned for this winter).

Meanwhile, Laurie oversaw the backfilling of the foundation wall unit (Feature 4). This has been our largest unit yet (unless you count all of the units we have dug on the dump was one unit, dug in segments), and it required a lot of manpower to fill in! 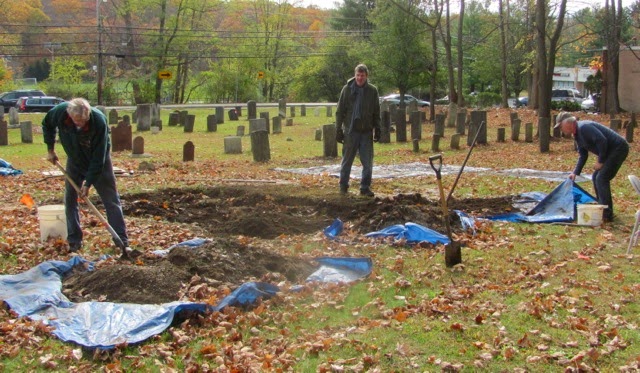 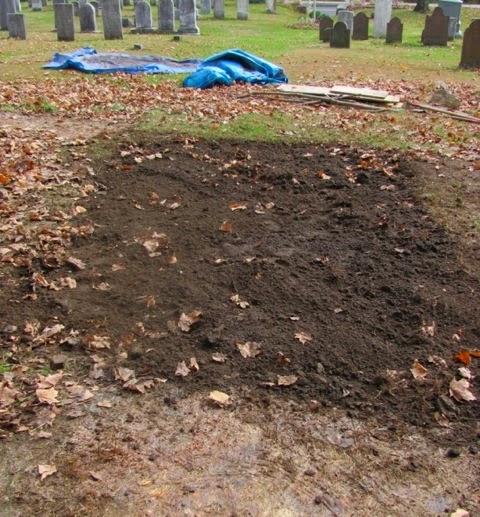 To summarize, briefly, our finds for the season:

1. In Feature 4, the "foundation wall" unit, we found a continuation of the feature we identified last year, and ended up tripling the original unit in order to follow it. To the 4 x 8 foot rectangle we dug in fall 2013, we added two additional 4 x 8 foot rectangles directly adjoining each other on the long sides, working westward, so that by the end a 16 x 8 foot rectangle was exposed (16 feet East-West, 8 feet North-South). We excavated around the stones down to the subsoil, leaving what we believed to be the contours of the stone wall in place. The finds we made in Feature 4 were mainly architectural (nails, mortar, slate tiles, some possible pieces of a wooden floor, ashlar stones, window glass) with some notable exceptions (earthenware pottery sherds, lamp glass, milk glass, and pieces of a mason jar; from last year, a gunflint and a stone pestle).

Feature 4A was our original unit, excavated last year. In this unit, in fall 2013, we found what looked to be a discrete, fairly intact stone wall, consisting of stones stacked on top of one another. Some crumbly white mortar was found between the stones and a handful of stones were found to be mortared in place. When we opened Feature 4B, adjoining Feature 4A on its western side, we found a much more scattered assemblage of stones that had no clear structure or pattern. By Feature 4C, the stones seemed to be arranged in a more coherent manner, and mortar was clearly used to fix them in place. It was also in Feature 4C that we found that the slate tiles we had found throughout 4A and B were clearly packed between the stones along with the mortar, suggesting that the feature was constructed this way. That is, the slate tiles were originally used as building materials, and didn't wind up in the stone wall when the roof collapsed, as I had suspected earlier.

We completed and backfilled the unit when we reached the end of the season. Based on our finds in Features 4A-C, we expect that the stone wall may continue westward in the area we have not yet dug. It is likely that we will open an additional unit (Feature 4D) in this location in our next field season. Laurie also raised the possibility of placing a unit between Feature 4 and Feature 1 (formerly referred to as the "dry well," which contains a large amount of architectural debris, including boulders with plug and feather marks, stencil-painted window glass, nails, and painted plaster) to see if we can establish a relationship between them.

My working hypothesis is that Feature 4 represents the foundation wall of one of the churches, most likely (due to the construction of the wall and the artifacts associated with it), St. George's Church. After finding ashlar stones in the stone wall that surrounds the cemetery, Laurie put forward the theory that after St. George's was deconstructed in 1819, the top layer of stones of its foundation were used to construct the stone wall, while the bottom layer of stones were left in place and buried (or became buried over time). We know that the proceeds from the sale of the frame of the old church were used to build the stone wall. This is circumstantial evidence, of course, but I find it very compelling! It also explains why there are ashlars in the stone wall, when typically stone walls in this area are made of unshaped stones.

2. In Features 6-10, the "dump," we continued to find large amounts of densely packed artifacts spread over a large area alongside the stone wall of the cemetery and extending about 20 inches below the surface, with the largest concentration of artifacts between 5-10 inches below the surface. This arrangement seems highly suggestive of a dump, and in particular one that was used over a long period of time (perhaps as early as the late 18th century, and continuing into the 20th). This period coincides with the period of use of the site as a churchyard and cemetery, and most of the artifacts seem to date from the years when the cemetery was in most frequent use (the mid-19th century). It's certainly possible that the parishioners of St. George's and St. Mark's Church dumped their refuse here. It's also possible that their neighbor to the south, the Methodist Church (which later became a residence, a parsonage, and a hotel), and their neighbor to the west, which was occupied by a house as early as the 1860s, contributed to the pile.

There is a lot we can learn about the 18th- and 19th-century community from what it threw away, and almost endless avenues open for investigation. Just a few stray observations:

-An earthenware tobacco pipe suggests that someone in the early 19th century was using local clay to manufacture pipes, despite the profusion of cheap tobacco pipes imported from England. How widespread was this local manufacture? Was it just one producer or many? What would make someone choose a locally manufactured pipe over an imported one?

-Multiple teapots, teacups, plates, and serving dishes attest to the popularity of tea drinking in the area along with a correspondent rise in conspicuous consumption. Almost anyone could afford their own tea set, choosing from a variety of different patterns and styles, and as soon as a piece was broken, it could be thrown away and replaced.

-A variety of soda bottles link our site to local bottle manufactories in the area (including one located just a mile away in the center of town), while medicine bottles attest to the use of dubious "cure-alls" containing potent ingredients such as morphine and liquor. The bitters bottle we found last year (we found more pieces this year) could have been used to treat the malaria that we know was endemic to the area throughout the mid- to late 19th century.

-Ice skates, a cap gun, a fishing hook, and a single jack suggest play and leisure activities during the 19th century. People had the time and money to spend on such activities, and children were provided with time to play and toys to fuel their imaginations.

-While the evidence linking them is circumstantial only, the shoes and eyeglass lenses we have found bring to mind the shoe and optical factories, respectively, which were located just down the road in the mid- to late 19th century. Whether or not these items came from these respective factories, the industry in the area played a large role in shaping the community to which the site belonged.
Posted by Madeline at 10:08 AM 4 comments: