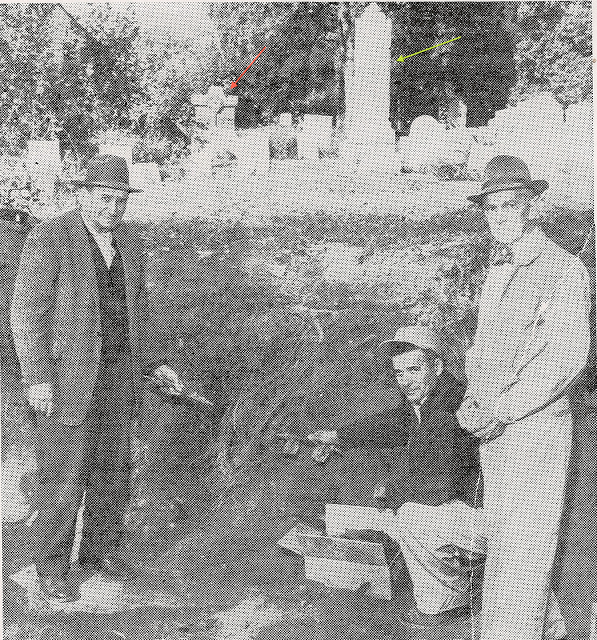 Months ago, I posted this photo from the October 6, 1960 issue of News of Northern Westchester. It shows (left to right) Rocco and Sam Amuso of Amuso Mason Contractors, Inc., holding coffin handles they unearthed in the southeast corner of the St. George's/St. Mark's Cemetery. Standing next to them is Oliver Knapp, father of the future village historian. I added the arrows in the photo to point out the Haines monument (red) and the Williamson monument (green).

Here are some excerpts from the article, written by Jim C. Barden, which accompanied the photo:


"Should the dead be disturbed to protect the living?

That question was answered by village and church officials here who decided to take off the corner of historic St. Mark's Cemetery on East Main Street to eliminate a dangerous curve ...

But a grave was disturbed yesterday in the process of taking off the corner and some church officials who had favored the move are wondering if they did the right thing ...

The contractor, Rocco A. Amuso Jr., pointed out that the coffin parts and bones were found just beyond where the stone fence is being realigned and 'were not in the way of my work.' His men have been digging for the last two days with hand tools.

All the corner had been taken away and a shallow ditch dug for the stone fence when the coffin pieces were discovered about 8:30 am. Amuso poured concrete yesterday afternoon which will be behind the stone fence. In the concrete wall, workmen built a small wooden recession for the end of the grave. The stone fence will be replaced by hand within the next day or so."

This weekend, Rocco Amuso's daughter Agnes gave the following photos to Laurie to scan. They were taken by the Amuso brothers (that is, Amuso Mason Contractors, owned by Rocco and Salvatore Amuso) to document their work at the cemetery and clearly show the removal and reconstruction of the corner, as well as the large tree that stood there. It's really spectacular to see these photos - not simply because they show the work that was done, but because we have so few historical photos of the cemetery.

The photo below appears to show the cemetery before the work was done. It's hard to tell because of the way the photo is framed, but the corner of the cemetery is just out of view to the right of the photo. This is looking north; Route 117 is to the right, parallel with the line of trees (which must have been very old, given their size. I don't believe any of these big trees are standing today. You can see what were probably these trees during the time when St. Mark's was still standing in this photo.) 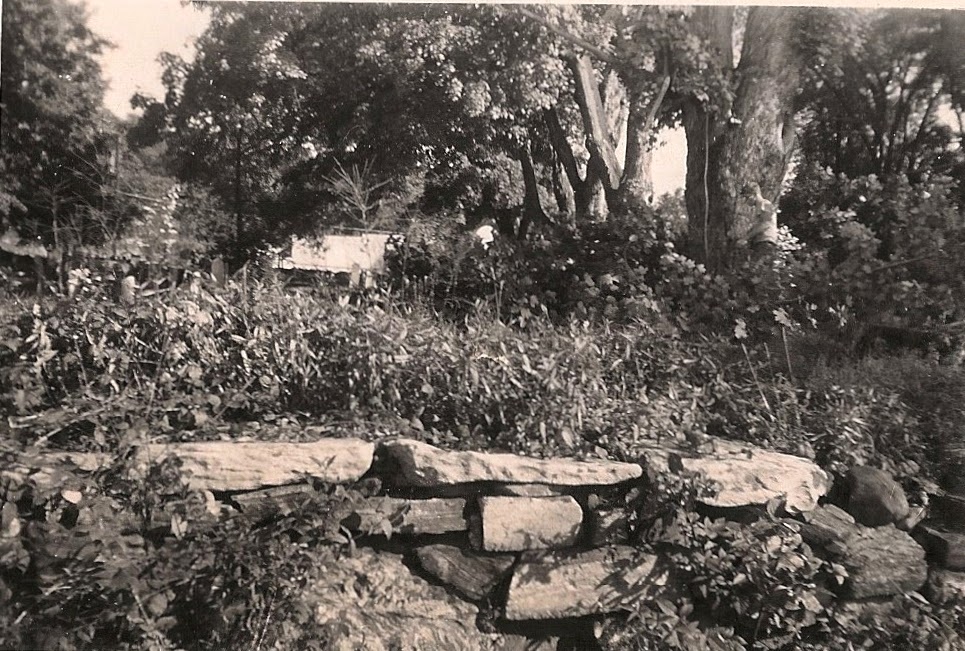 This photo appears to show the deconstruction of the wall - after the tree was cut down but before the stump was removed. 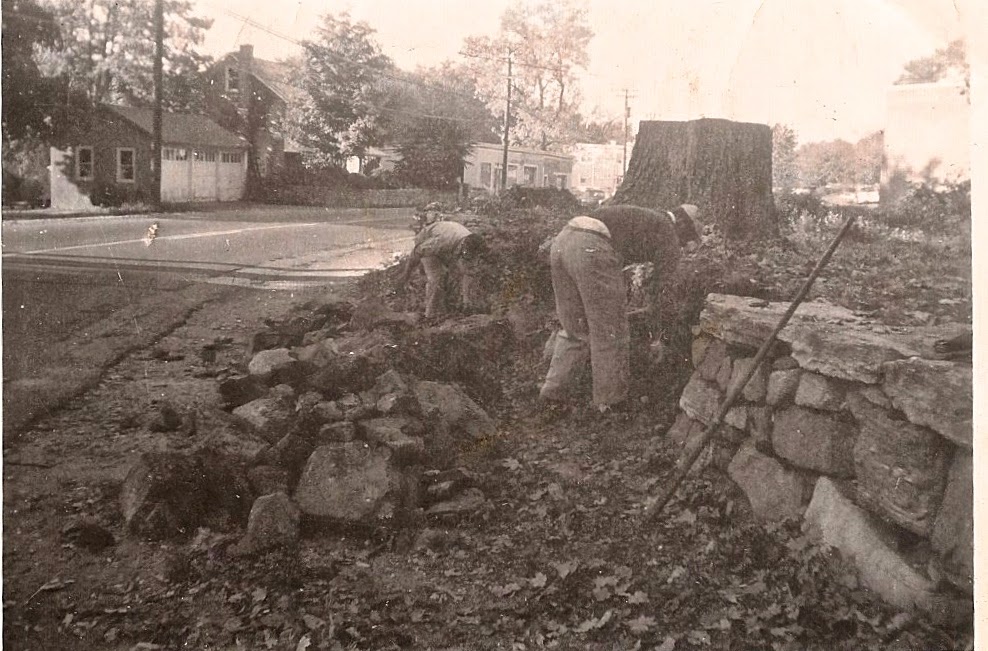 Here, the wall has been fully removed and the workers have cut back the corner as far as they could. On the road to the left is a backhoe, on its way to remove the stump. 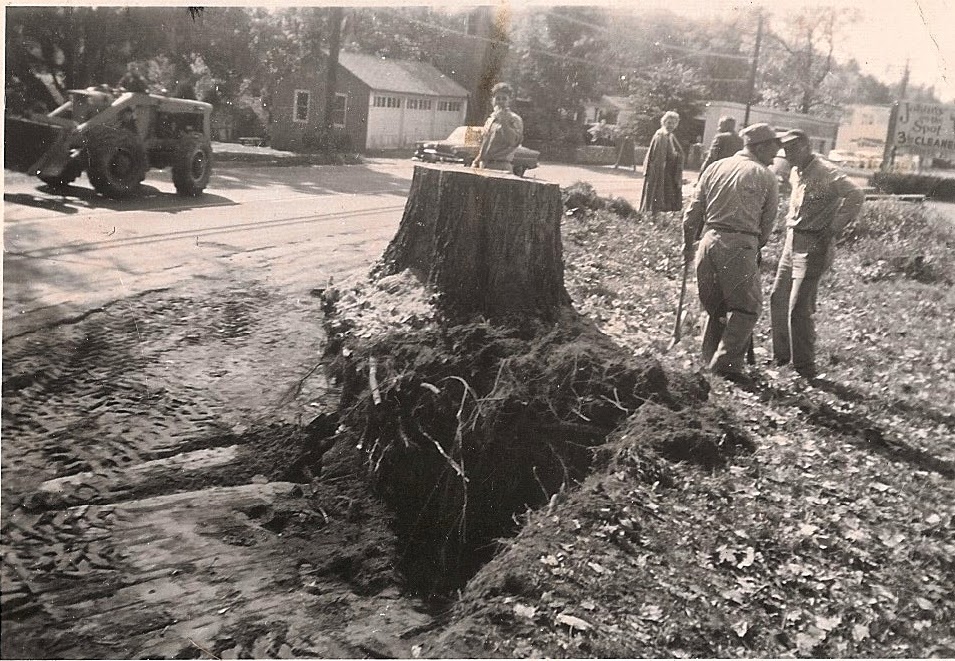 Next: removal of the stump with the backhoe. Here you can see just how close this work came to the gravestones. What would the town have done if the work had necessitated moving marked graves? 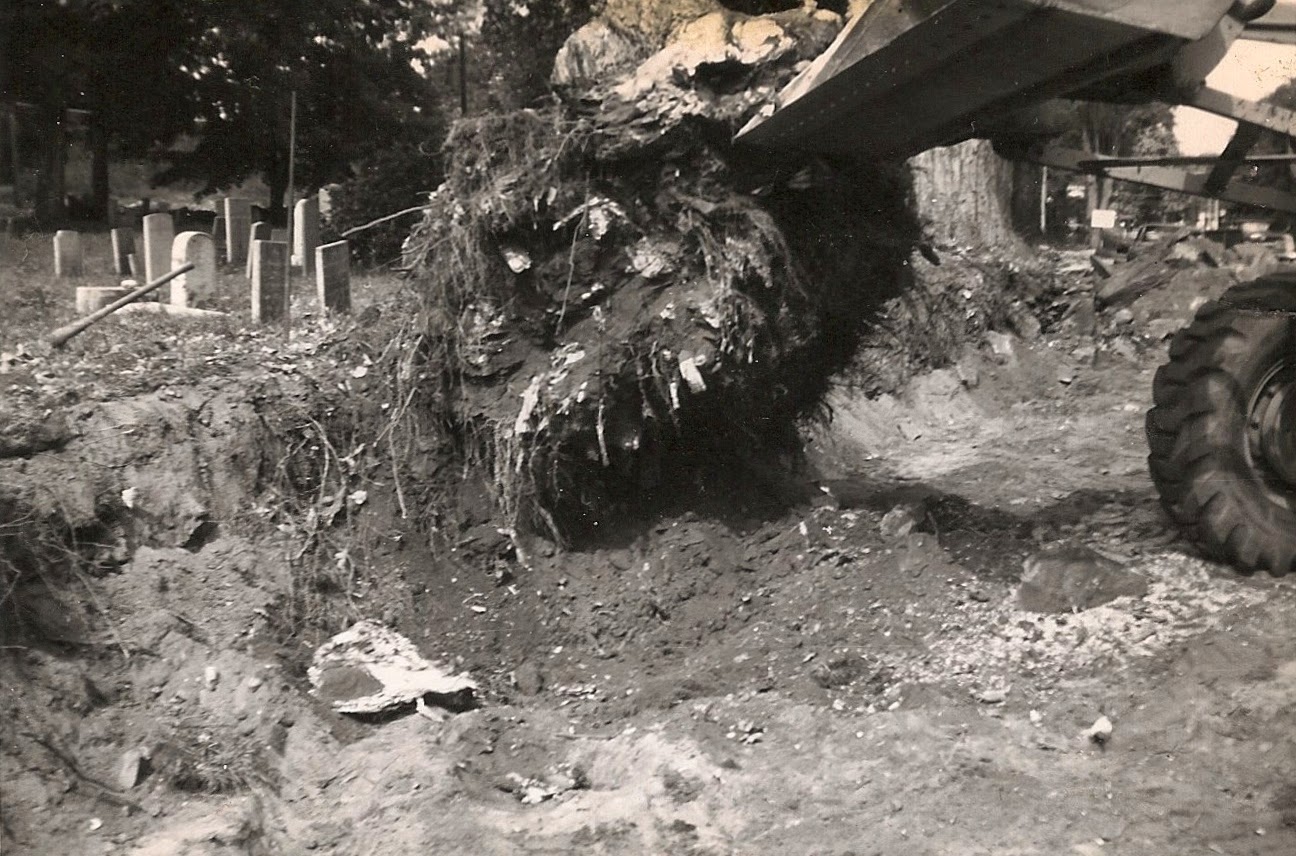 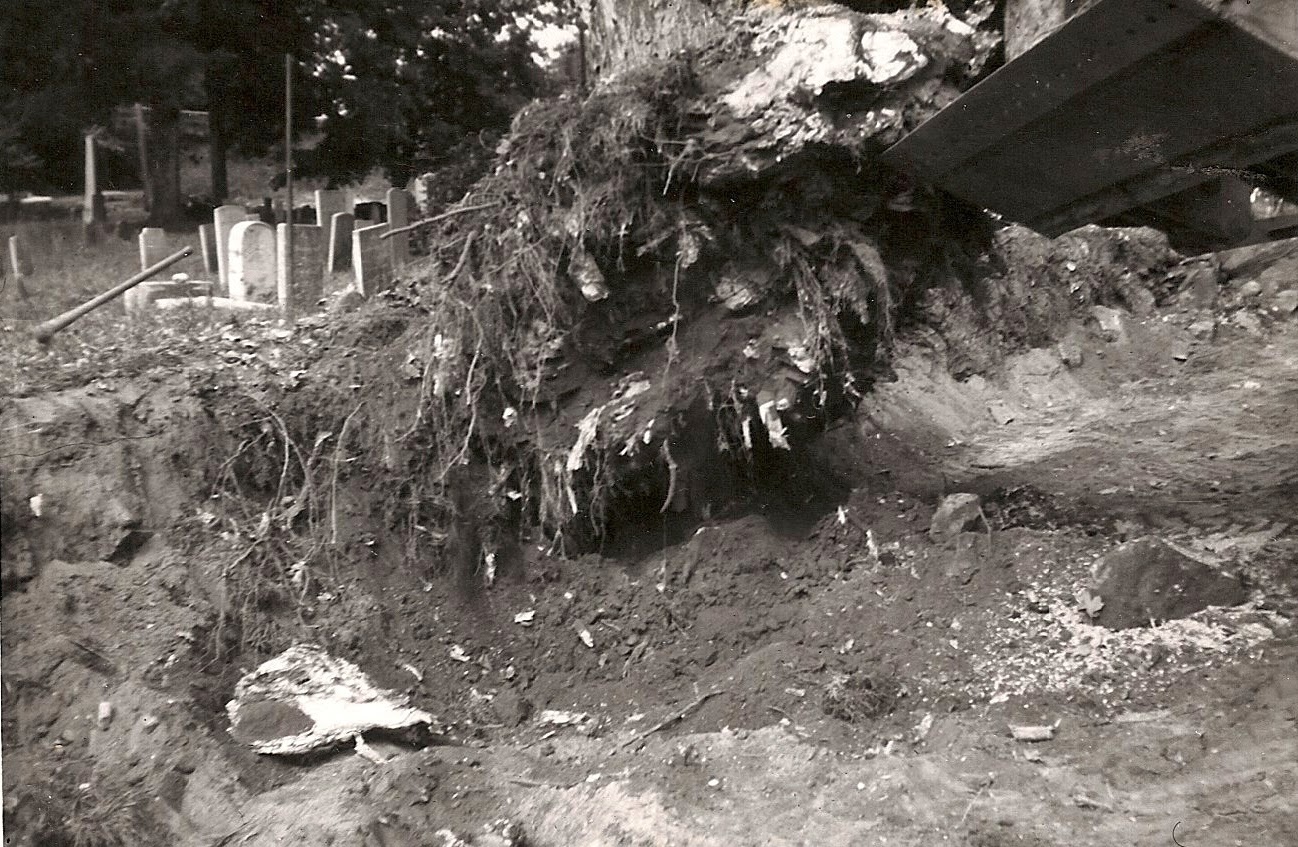 I am guessing this photo shows the discovery of the grave. 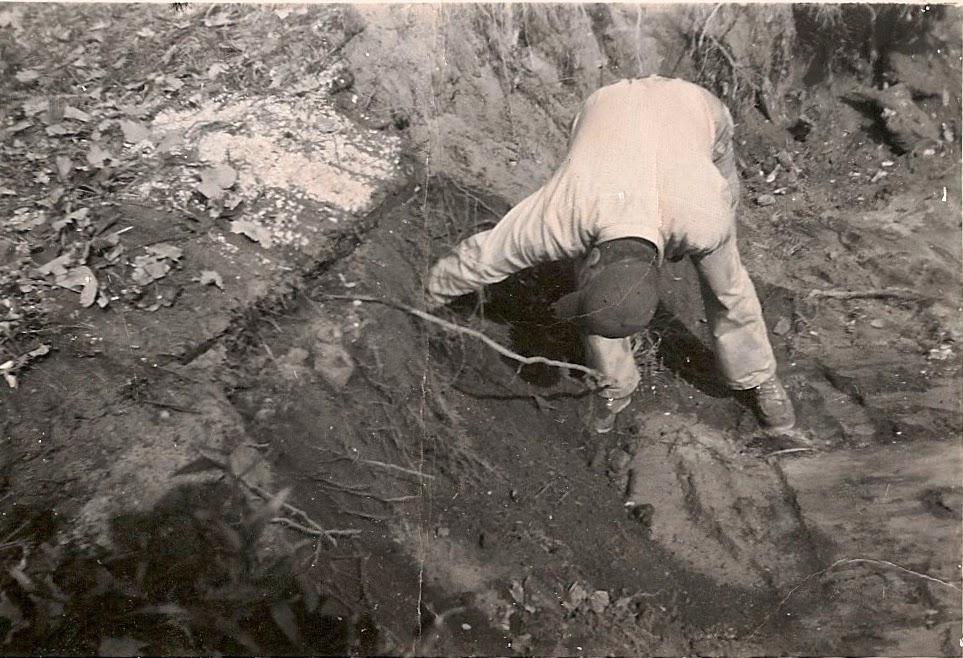 This, then, would be the grave? The article isn't clear about which parts of the coffin were found, other than the handles. Is this the coffin? Or is it the "wooden recession" that the workers built to contain the grave? 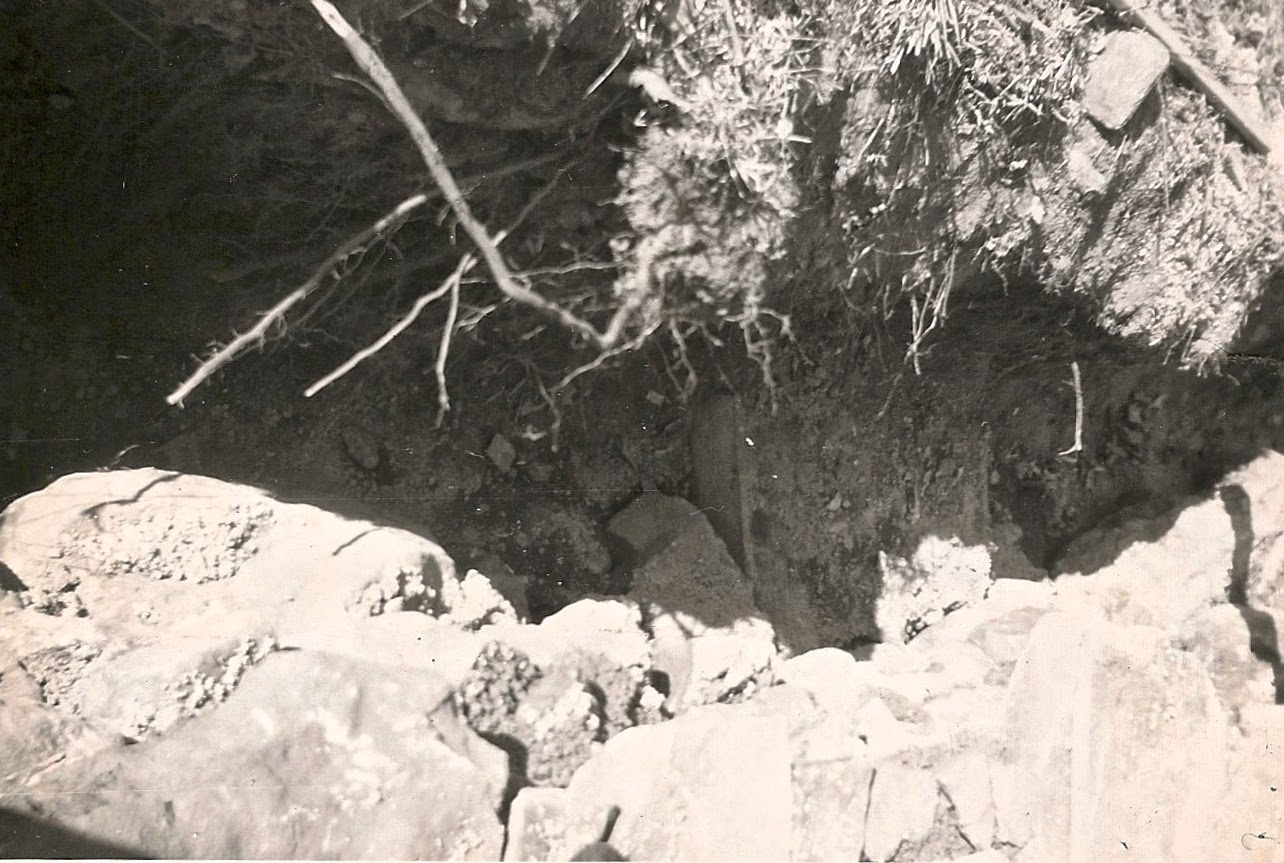 I am guessing, based on the way that the wall has been rebuilt over it in this photo, that this is the "wooden recession." But is this in front of or behind the wall? Is the grave beneath the sidewalk today? 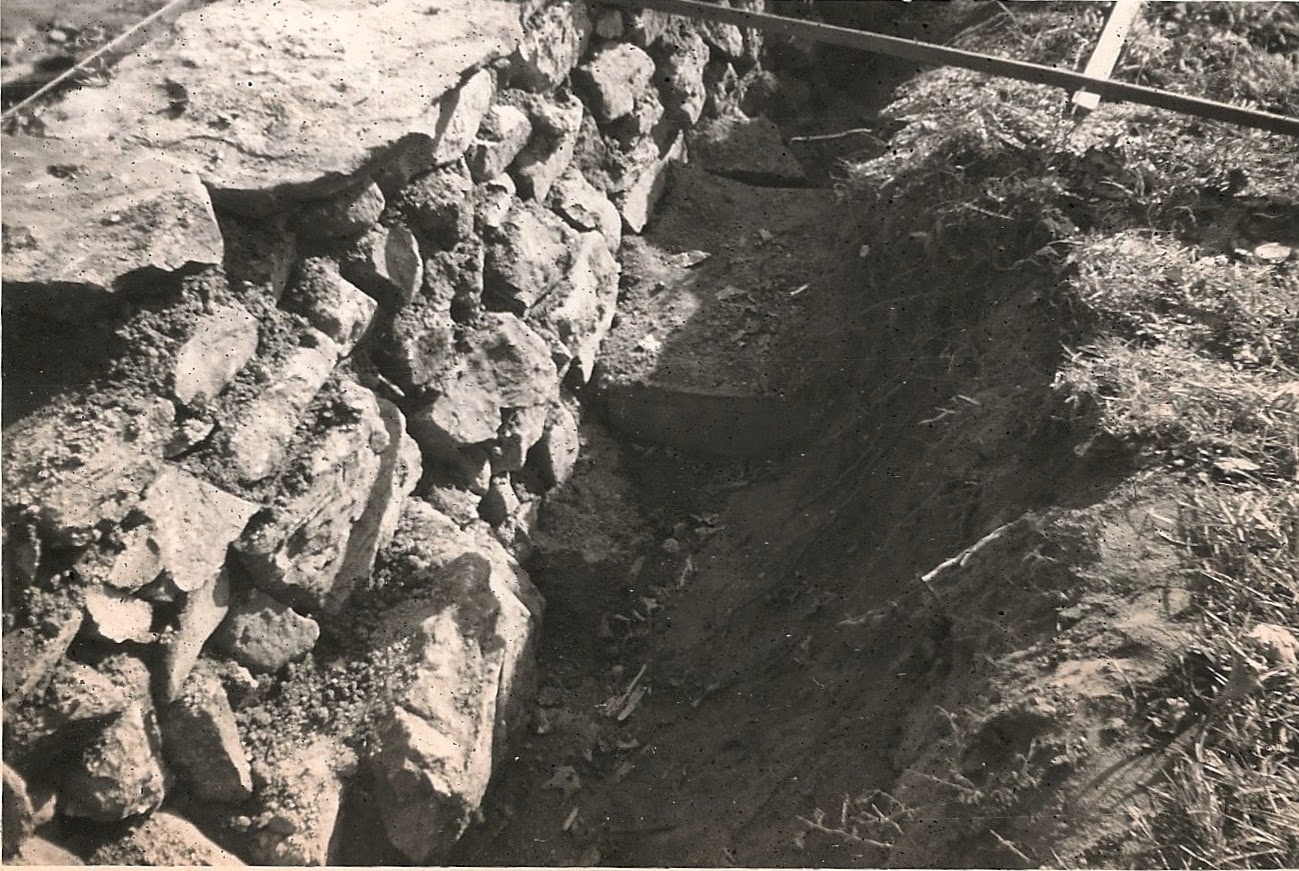 Here is the pouring of the concrete, as mentioned in the article, behind the stone wall. 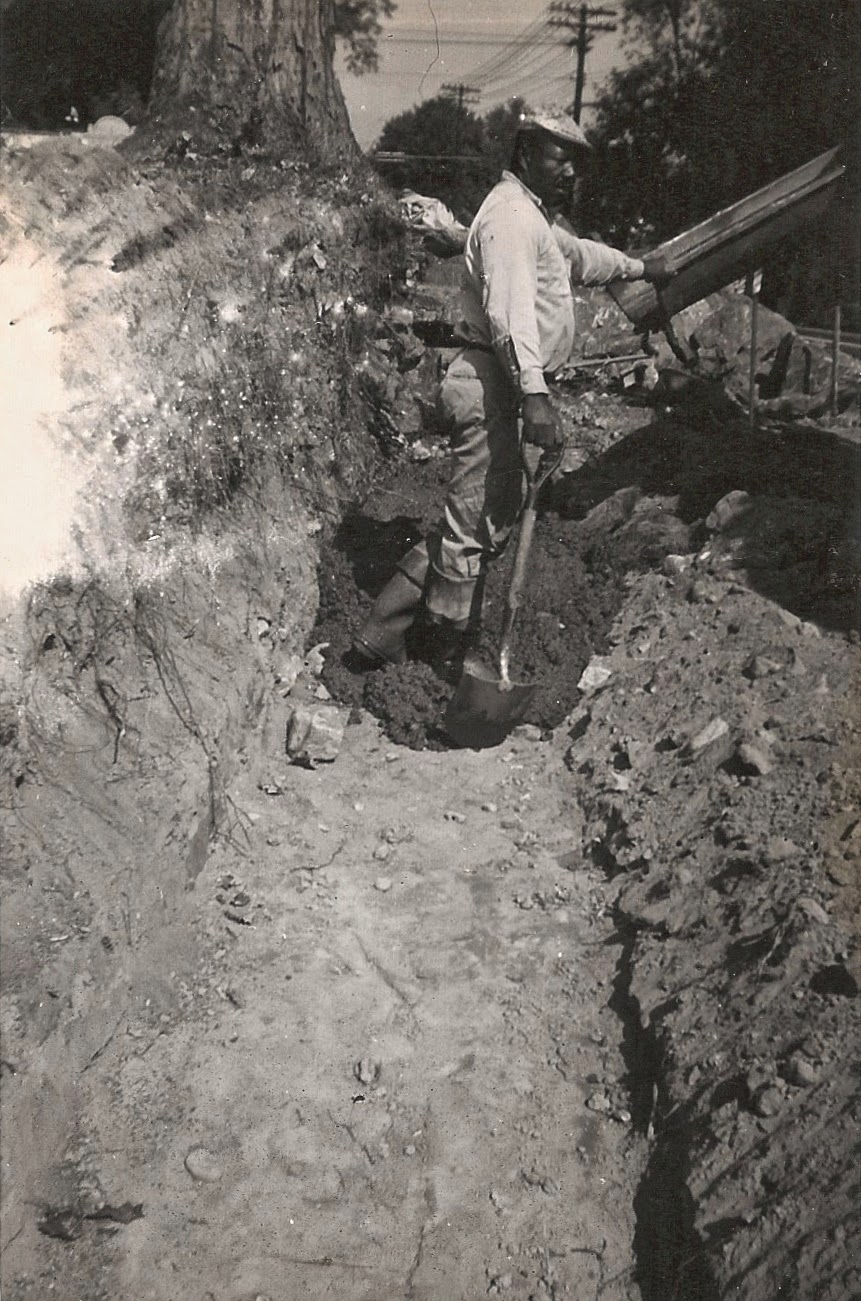 I am not sure what this photo shows, but I'm assuming that this is the wall after the concrete was laid. It appears that cinderblocks were put in place behind the unshaped stones. 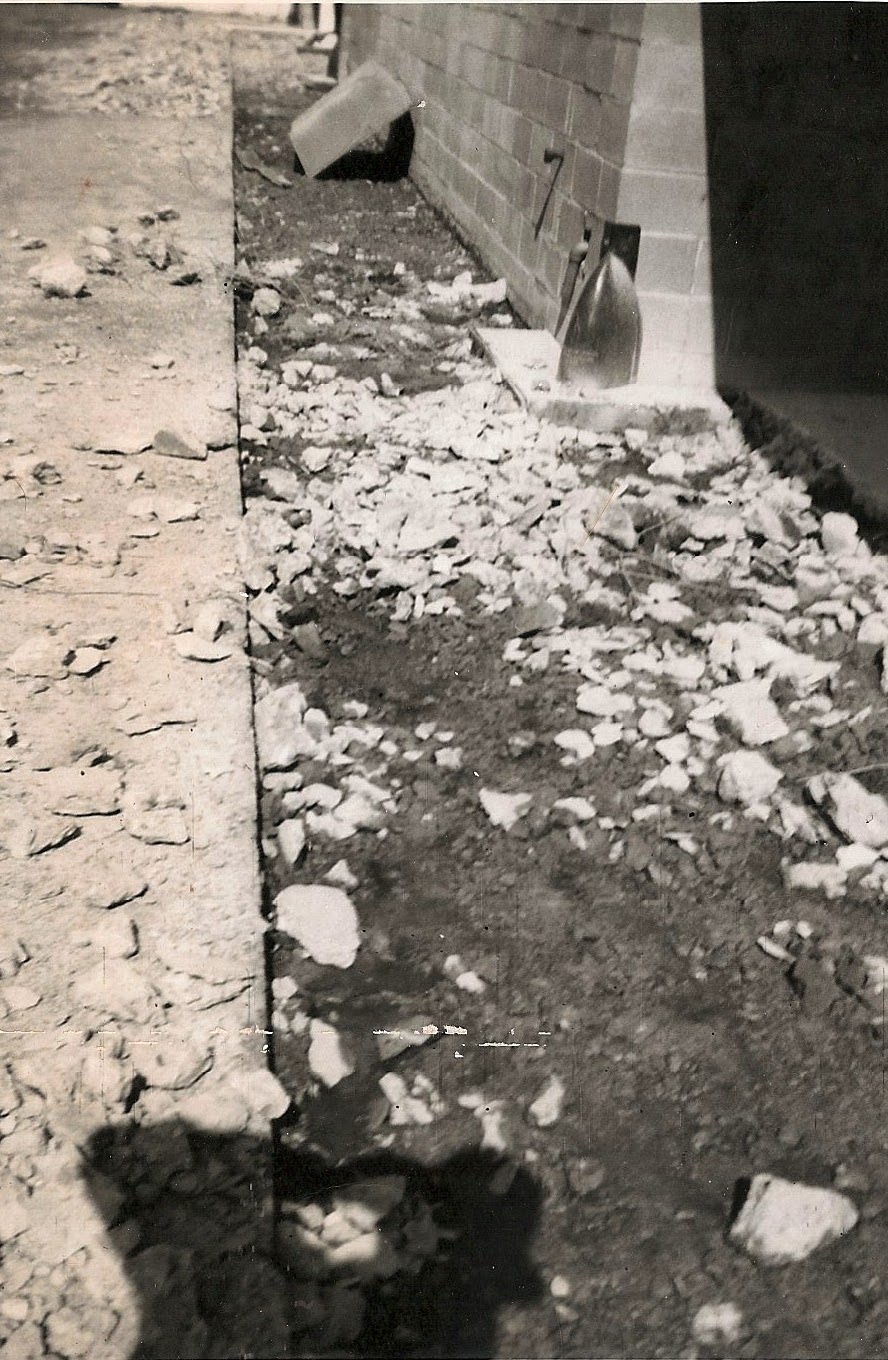 Finally, the stone wall is rebuilt over the cinderblocks. I am assuming that the workers used the original stones. Note the string that has been tied across to make sure that the wall is straight. They certainly did beautiful work on the cemetery. Without the documentary evidence, I would have never guessed that the corner had been removed. 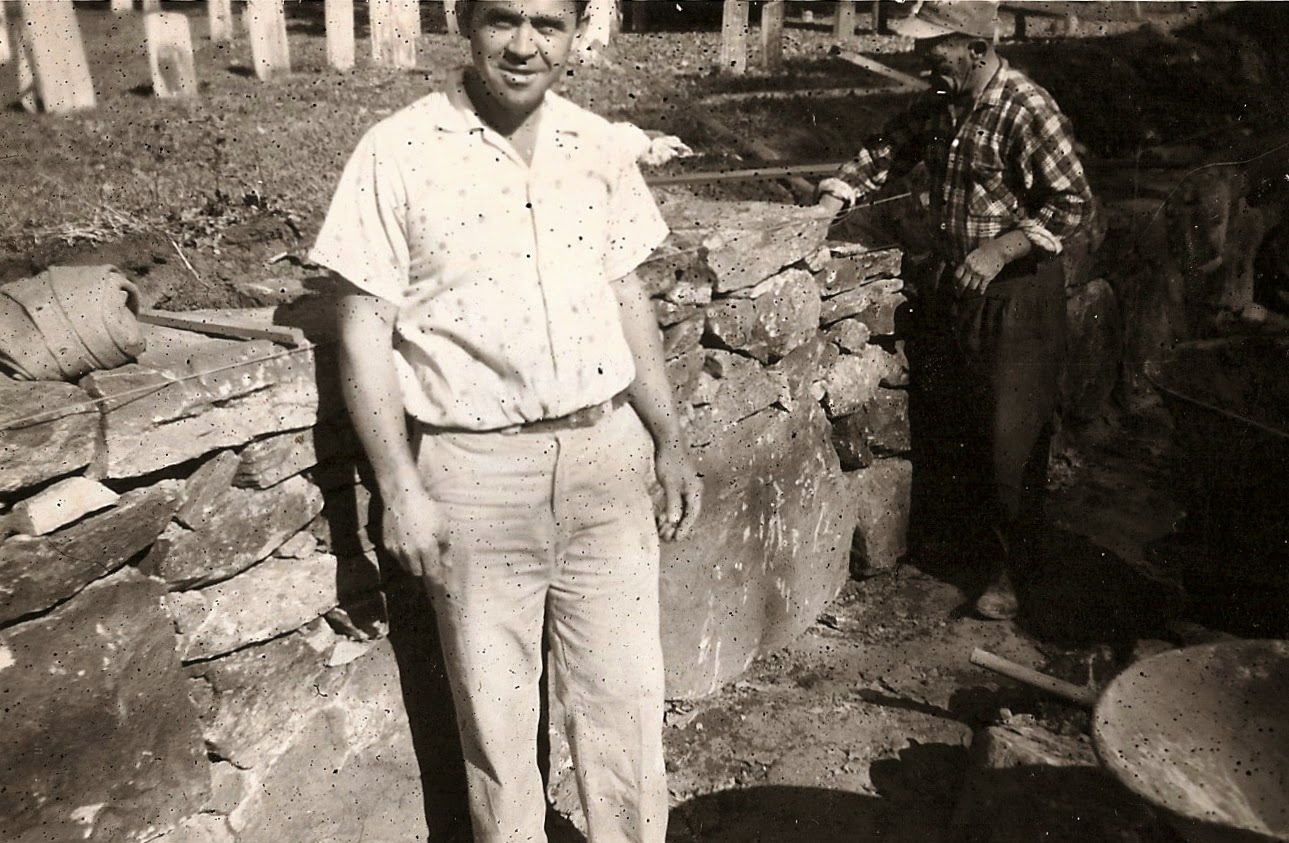 Posted by Madeline at 4:04 PM No comments: