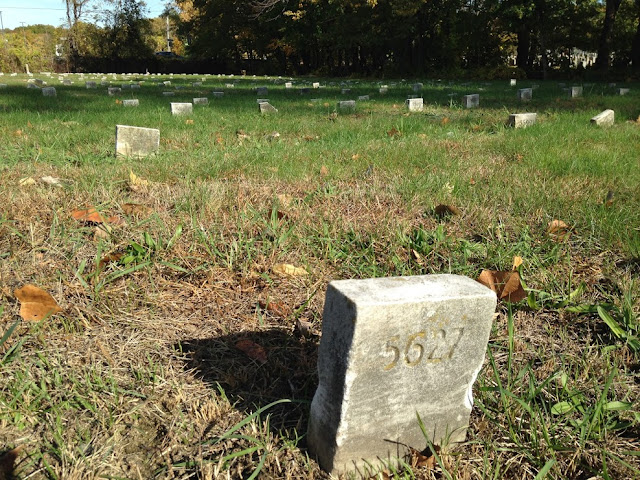 Can you tell it's been a busy semester? Over the course of the last few months, I've researched and written two papers on the North Burial Ground in Providence. Initially, I was interested in the beautiful slate stones in the colonial section of the cemetery, which was established in 1700. As time went on and I explored the Burial Ground further, however, I entered into a mortuary realm that I had never experienced before: that of the "free grounds" and "potter's field." The former described areas of the Burial Ground that were set aside for people who could not afford to buy and maintain a lot in the main section of the cemetery, but could afford the $4 or so for burial and perhaps a monument. The latter described an area used by the City of Providence to bury the individuals who had no family or funds to provide for their burials: paupers, inmates of institutions, and unidentified bodies. 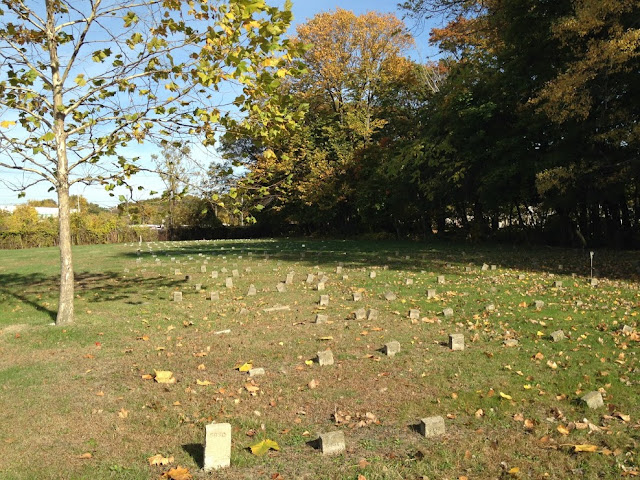 I have been to a lot of cemeteries in my time, probably quite a few more than your average 26-year-old, but I have to say that visiting the potter's field in the North Burial Ground was by far the most emotional experience that I have had in a cemetery in my life. Stripped of the sentimentalism and beauty that surrounds middle-class cemeteries, the potter's field offers an unvarnished view of mortality that most of us don't think about on a daily basis. It also shows evidence of a very unique and personal tradition of commemoration.

The graves in the potter's field are marked only with numbered markers. Or rather, some are marked. The potter's field was originally much larger than it currently is. In the early 1960s, developers moved many of the graves in the potter's field and western half of the free grounds into a mass grave near the area pictured above. I haven't been able to pin down an exact number, but my estimate is that at least a few thousand graves were moved. All of these graves were originally marked, but it was considered to much of a hassle to move the markers to the new location, so they were discarded.

When I came this place -- which is accessed through a bridge, through a band of forest in the northernmost area of the Burial Ground -- I had preconceived notions of what a potter's field would be like. I imagined undignified anonymity and neglect. My expectations were controverted by the reality I found. There is anonymity, certainly, but also evidence of ongoing memorialization. Some of the numbered markers have been replaced or supplemented by markers with names. Some of these supplementary markers are professional stones, of the kind you might find in other areas of the NBG, but others are makeshift (or "vernacular" as I might put it in a paper). I won't show you these markers, because they are all relatively recent, and I don't like the idea of publishing a photo of someone's gravestone that their family member might recognize, especially when the gravestone is in such a private location. However, I can describe some of them.

Two graves are marked with crosses made of planks of wood; the names are spelled out with the kind of stick-on letters you'd buy at a hardware store. One of these markers is surrounded by artificial flowers.

One marker consists of a slab of concrete spray-painted with the name of the deceased and a heart.

One person's grave is marked with a plastic label bearing his name, next to which is placed a toy car.

In one case, someone wrote the deceased's name and dates of birth/death onto the numbered marker with Sharpie.

And so on. These acts of commemoration seem all the more personal and touching because they were created by hand, rather than commissioned from a professional. They suggest that the people buried in the potter's field are far from forgotten. However, due to the type of materials they are made of, many of these markers are unlikely to survive for very long. It is possible that there was once many more of them, perhaps extending back into the 19th century, but that they disintegrated long ago.

In the oncoming weeks I hope to share more from the North Burial Ground, including stories of people from the 19th century who were buried in the free grounds and potter's fields.
Posted by Madeline at 9:29 AM 2 comments: